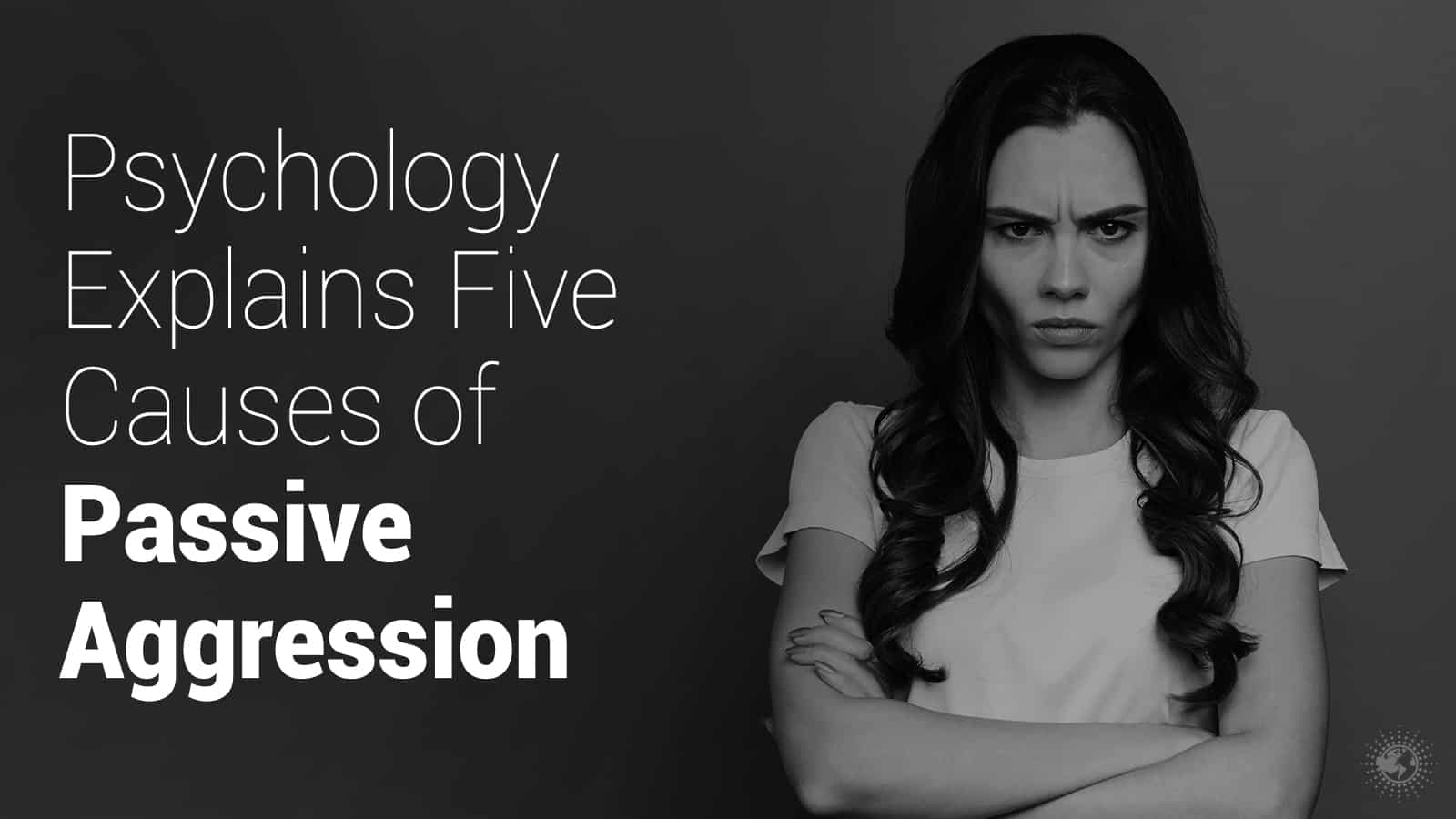 If you lean towards passive aggression, you aren’t good at directly sharing your negative feelings. You’d slightly hint around or use sarcasm to show your disapproval. You may or may not realize you do this. Or you may dismiss it as your strange sense of humor that puts people off.

What is passive aggression?

Passive aggression or PAPD features, both aggressive and passive-aggressive behavior in your behavior and communication. Your underlying desire is to stop people from asking you to do things or find fault with other people’s behavior in a subtle but still aggressive way. Towards the end of WWII, the military coined the term passive aggression to describe soldiers that didn’t comply with orders. Studies found that PAPD has overlapping characteristics of narcissism. Scientists suggest they are separate disorders but are similar in outworking.

Passive-aggressive people display some typical behavior. They’ve learned to say the appropriate thing, but they have an opposing attitude in their mind.

This person will not come right out and tell you they aren’t happy about your choice. Instead, they’ll say things that sound okay, but with a tint of aggression behind it.

Example: “Fine! If that’s what you want.”

Their compliments are shrouded in sarcasm. You don’t know if you should thank them or if they’re being sarcastic. It’s hard to know when they’re being honest.

Example: “Must be nice to look good in everything you wear.”

People with PAPD aren’t honest and say they don’t want to do things. Instead, they’ll make up excuses for not doing what they were asked, usually blaming you somehow. This behavior can be confusing, and it’s easy to get defensive when they say things like this.

Example: “Oh, sorry. I didn’t know you were in such a hurry to get that done.”

Passive aggressive people resort to negativity. You’ll see them playing the victim rather than admit their real feelings. It’s almost funny to watch their theatrics, but they are so good at playing the victim, they believe they are.

Example: “It’s stupid to go to that store, but I’ll come, anyway.”

What are some common signs of PAPD?

These are common attitudes you’ll notice in a person with PAPD. Their behavior may not seem that alarming, but these attitudes can ruin relationships at work, home, and school.

Here are the five primary causes of passive aggression

There are many theories as to what causes PAPD. Scientists are still studying PAPD to get a full understanding of the causes and what can help those who struggle with this disorder. But, it’s through that these five things at least contribute to PAPD.

Different kinds of home situations affect kids depending upon the case and the kids’ personalities. These are three everyday situations that can cause PAPD in kids and then later when they reach adulthood.

Their environment– Homes where kids aren’t allowed to share your feelings are thought to produce feelings of anger and frustration. Kids will resort to backhanded ways to express their feelings instead of being honest.

Community pressure-If kids aren’t allowed to act a certain way due to social pressures in a community such as the church or a family business. They will find ways to secretly express their anger, such as picking on a younger sibling or other kids.

Hard to share feelings-If kids find it challenging to share their emotions, they will lapse into an angry demeanor to keep people at a distance. They’re labeled angry kids, and parents, teachers, and other kids tiptoe around them to appease them. It’s a defense mechanism to not hide emotions and real feelings.

Neglect and child abuse-Kids that are neglected or abused feel out of control and end up angry. These feelings can lead to PAPD.

Harsh punishment-Parents who punish their kids harshly contribute to their passive-aggressive tendencies. These kids are similar to neglected and abused kids, but they have conflicted feelings if they know their parents love them.

2 – Health contributions that cause PAPD.

Health issues may factor in PAPD from your health issues or your mother’s health or activities when she was pregnant.

Low self-esteem makes you feel unwanted or hurt by others. You feel justified in your anger and desire to hurt others because you’ve been hurt. Revenge is a common sign of low self-esteem. It’s a weird way to get attention, even if it’s negative. It’s also a self-fulfilling assumption that you’d be rejected when others react to your poor behavior.

4 – There was a dominant person in your family

If you had a dominant family member-a parent or sibling, you are apt to be passive-aggressive, taking out your frustrations on another sibling, or later in life, your spouse or kids.  You may have felt helpless to control your situation, so you resorted to similar behavior to get back at others for what you suffered.

Being bullied at school or home when you were a kid, this can cause you to be passive-aggressive. Being judged for your clothing, accent, or lack of intelligence contributes to kids growing up to be a passive-aggressive adult.

How do I change my passive-aggressive behavior?

You can feel encouraged if you realize you are passive-aggressive. This is the first step in the healing process. Once you see your propensity towards this kind of behavior, you can begin to take steps to change. It’s a process that may not happen as quickly as you want.  You will feel frustrated at yourself and others.

That’s okay. Change isn’t easy. Don’t give up. Take it a day at a time, you’ll eventually see a difference in your life.

When you see it coming out in your attitudes, stop.  If you’re tempted to say something sarcastic or unkind, stop. Be as open as possible in light of the situation. If you’re with your spouse, you can be more transparent about your feelings at the moment than you could at work.

2 – Learn how not to be aggressive

Passive aggression is still aggressive, even though it’s passive. Find a way to answer that’s non-aggressive. Ask questions, or for clarification, or just be quiet for a few minutes to get your composure before you explain.

Look to the source of your passive-aggressiveness. If your early upbringing contributed,  come to terms with it by forgiving or get counseling to help you deal with your past. This scenario can be very healing and helpful to begin change.

It’s okay to be upset and angry at people or situations. Everyone gets angry once in a while. Even Jesus got angry. So you can too.

You can share your feelings in a calm, adult way. Be honest about how you feel when someone says something hurtful. It’s best to get things off your chest rather than to stuff them. It’s a learned skill to share feelings, it won’t come quickly at first, but with practice, you’ll get better at it.

When a conflict or argument occurs, don’t run away or shroud your emotions in sarcasm or denial. Be real. Talk it out with the other person. Be respectful but honest with them.

It’s possible to change. You have the right to be healthy and whole. Don’t allow fear to rule your life. Let your passive aggression be a catalyst for your healing. Your wholeness is dependent on your belief that you can change.

Ask for help from family or friends. Tell them you want them to point out when you show aggression, ask them to help you learn how to resolve conflict respectfully without sarcasm. Be honest and open with them about your difficulty in sharing emotions.

Or, if you don’t think you have this kind of support, find a group or get counseling to work through your PAPD. Counselors are trained to listen and ask good questions. This session can help you unravel your thoughts and emotions in a safe atmosphere where you know you won’t be judged.

Final thoughts on dealing with passive aggression in your life

Passive-aggressive behavior is typical in our society. Many people with this disorder aren’t aware of it, but there are some common characteristics and attitudes. If you realize that you have PAPD, don’t assume you’ll never change. You deserve to be happy, and you can be healed from your past.