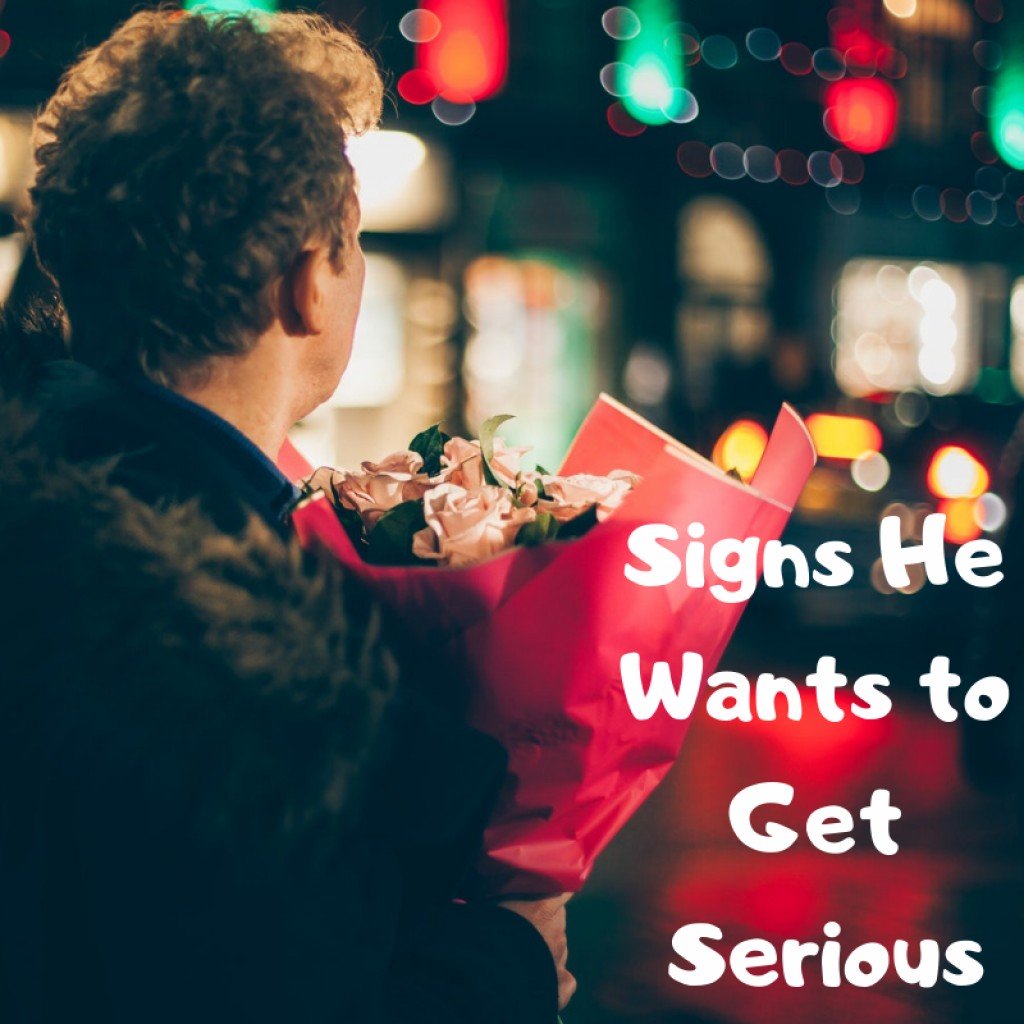 He Likes You, But Does He Want to Pursue a Relationship?

He keeps staring at you, giving you compliments, and randomly giving you hugs—he definitely likes you. For now, we’ll say that’s enough to know that he enjoys the time he spends with you and appreciates you. Congrats!

But is that enough to say that he wants you to be his girlfriend? Not so fast—this is where things get tricky. There are a number of reasons why a guy might think a woman is cool but doesn’t want to pursue a relationship with her. If you’re investing a lot of time and energy into this person, it’s important to know what his motives are before you fall too hard.

Even though you guys might spend a lot of time talking or hanging out, it’s hard to know for sure if someone wants a commitment or not. Here are a few signs and subtle hints that he wants to start a serious relationship with you.

1. He consistently makes a special effort to be around you.

He consistently makes a special effort to be around you—being “busy” will never be an issue. He is busy, I’m sure, but he’ll still manage to make time for you and figure out how to bring you into his life as often as possible. If he isn’t seeing you in person and making that effort, then he probably isn’t that interested in a relationship.

2. Guys who seriously want to date you will do so in person…

Guys who seriously want to date you will do so in person…not through texting, chatting, or other mediums. (Including actual psychic mediums. If he’s trying to talk to you through a psychic medium, he probably is just looking for some side entertainment or sorts…or a way to get bankrupt.)

Does he like you enough to court you? It may seem like it would faster to take all the initiative in a relationship yourself, but you need to let him initiate sometimes. If he cares about you, he should be willing to put himself out there every so often.

4. He aligns his plans with yours.

He aligns his plans with yours. If he makes sure his plans line up with yours, that means he’s serious; otherwise, he’s fickle.

He makes time for you. Time is the most valuable gift we can offer anyone—it’s more precious than even your body.

6. He makes an effort to take you out and buy you dinner.

He makes an effort to take you out and buy you dinner. Not every guy who buys you dinner wants to be in a relationship, but a guy who does want to get serious will likely take you out to somewhere nicer, more upscale—somewhere you’ll have to wear something nice. Some guys are posh and like to hang out with ladies in pretty black dresses all the time, but really? How often?

7. Speaking of wearing something nice

Speaking of wearing something nice—if he gives you jewelry on a whim, he probably sees you as more than just some pretty girl he hangs out with. Guys don’t usually splurge or take time to look at pretty or interesting jewelry for someone they’re not interested in.

8. He asks about your family and genuinely wants to meet them.

He asks about your family and genuinely wants to meet them. People don’t usually have an interest in other people’s families unless they want something serious.

9. He wants to introduce you to his family, his dog, his cat, his neighbor, his best friends

He wants to introduce you to his family, his dog, his cat, his neighbor, his best friends……you get the idea, right?

10. He sends you handwritten letters.

In the age of texting, emails, and Facebook, who has time for letters? Only people who are serious, like family, best friends, and people who want to stare deeply into your eyes and talk to you about getting old.

This doesn’t necessarily mean he wants a relationship, but it does mean he values you.

12. He gets protective over you—but not in a misogynistic way.

Misogynistic tendencies are red flags you should not ignore—let those red flags guide you far, far away from Mr. Chauvinism. But if he is gently protective of you, he’ll try to make sure you’re safe. He’ll check for bad guys, but will also teach you how to use a baseball bat to knock out spiders or whatever. And, above all, you feel safe when you’re with him, which is one of the highest compliments to a man’s integrity.

A guy on the hunt for a relationship turns into a detective. He wants to know everything about you, and it can feel like he’s taking notes on a crime scene. He’ll ask where you live, if you have family nearby, where you work, what animals you have, etc. Enjoy this stage while it lasts. He probably won’t leave enough room for you to ask questions about himself. You may have to remind yourself to ask him questions, because really—he’s just a tad too focused on you to see clearly.

14. He doesn’t normally talk about your body.

He doesn’t normally talk about your body—and if he does, it’s short-lived and sweet, like “Those are nice earrings,” “You have pretty hair,” or “Your smile is nice.”

They’re analyzing every move you make to see if you’re interested as well, and sometimes what they’re thinking just falls out of their mouth. You can really tell a lot just by listening to him.

If he is doing that, he isn’t ready to settle down.

It’ll come out of nowhere. You may have gone on a vacation for two weeks then come back to some pottery class you’ve been attending… and then all of a sudden someone you’ve recently met there will give you sappy eyes and a, “I missed you. I thought you quit.” The “I miss you” isn’t near as much of the plague as “I love you,” but it’s endearing. We miss what we value. This person may not even know it yet, but there’s probably a spark/potential/confetti party hidden somewhere in this connection that you should consider, especially if they gave you really big sparkly eyes while saying it.

18. A guy who likes you might be prone to sudden mood swings.

Unfortunately, as we grow to like someone, our bodies get stressed out and go through various hormonal shifts. This should not be the only clue, but sometimes it can get nerve-wracking to have sweaty palms, butterflies in your stomach, an adrenaline rush, and restless thoughts just because you’ve taken a liking to someone. If someone has unrequited love, this hazy mess is even worse because all that energy is getting pent up inside. Either that wall has to come down, or someone is going to run away from you so they can get rid of all these feelings that decided to settle in their stomach.

No one comes fresh out of the womb looking for a relationship. You have to grow up somewhat, and that emotional clock is different for everybody. Some people may be ready to get hitched at 21, while others are going to wait until their 40s or beyond. Everybody’s different. However, someone who is closer to their 30s is probably more likely to be thinking of getting serious compared to someone in their early 20s. They’ve probably gotten a few things they want out of life and now feel independent enough to handle a relationship, because let me tell you…it’s like handling explosive fireworks. It’s going to be great—but if you’re not ready, it’s a lot of harmful, colorful stuff.

20. He took his sweet time getting your phone number or Facebook information.

Did he add you? Did he wait for an appropriate time to get your number? Did he wait a few days before messaging you so that he wouldn’t seem creepy? What was the first thing he said? His hesitation to contact you means that he’s probably afraid of coming on too strong and scaring you off.

When a guy doesn’t want a relationship, he is either going to be really clear about it or will avoid the subject. You don’t spend that much time with him, he doesn’t enjoy your jokes, and he probably doesn’t think about you that much. Does he give you special attention compared to that he gives his friends and acquaintances? If he treats you like everyone else, he probably sees you as just a friend.

Signs He Wants to Be Friends With Benefits, or Just Friends

Here’s another thing to consider: Some men want to spend time with you, but don’t want the commitment and seriousness of an actual relationship. Here are a few signs he just was to stick to being just friends—or friends with benefits:

In any relationship, having open communication and important conversations are key—after all, you can’t read each other’s thoughts! If you’ve looked at all the signs, thought of the time you’ve spent together, and still don’t know what he thinks about you, just ask. It just might be the start of something new between the two of you.